5-18-03   special report  What tonight's (May 18, 2003)  TV movie, "Hitler: the Rise of Evil" won't tell you (among other things): 1) Hitler and other Nazi leaders sought to move Jews to Palestine, but were rebuffed by Zionists According to a Jewish Satmar scholar: "While the mass genocide of European Jewry took place, several plans were arranged to rescue as many Jews as possible. Rabbi Michael Ber Wisemandel and Joel Brand, among numerous others, arranged with silent approval from Hitler and German SS leaders, plans for the evacuation of hundreds

of thousands of Jews, especially Hungarian, from Nazi persecution." (For more documentation, see Jews against Zionism's "Ten Questions to the Zionists" and our e-book, Zionism in the Age of the Dictators); and 2) During World War II, the Germans used Jews both as policemen in the Jewish ghettos (photo, left—they committed war crimes, prompting the late Professor Israel Shahak of Jerusalem University to recall how, during his boyhood in Warsaw: "Every Jewish child was taught, and this saved the lives of some, 'if you enter a square from which there are three exits, one guarded by a German SS man, one by a Ukrainian and one by a Jewish policeman, then you should first try to pass the German, and then maybe the Ukrainian, but never the Jew.'") and as soldiers in the Wehrmacht (photo, below—author Bryan Mark Rigg, first in a film and later a book, demonstrates conclusively that "perhaps as many as 150,000 men  including decorated veterans and high-ranking officers, even generals and admirals" were identified by the Nazis as having Jewish blood, yet were permitted to fight for Germany ). Why do we raise these points? Because they are part of a history that, by being suppressed, distorts how that era is perceived today and  also because they point to a side of Nazism that only is hinted at here, but which Real News 24/7 intends to explore in a historical study that is now in the works.) 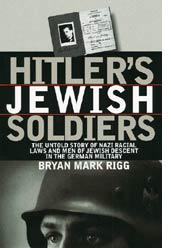 Hitler mini-series "clearly the portrait of a monster" Jewish groups and the Texas television stations who have refused to air CBS's "Hitler: the Rise of Evil" don't need to worry that the mini-series will help swell the membership rolls of neo-Nazi groups. "[Scottish actor Robert] Carlyle's creepy, charisma-free performance of Hitler," writes Reuters columnist Arthur Spiegelman, "as a rigid fanatic with eyes as hard as black rubber is not calculated to win converts." "Hitler" producer's firing proves his point  In comparing the current political climate with the one that prepared German for the Nazis' ascendancy, Ed Gernon told TV Guide"  It basically boils down to an entire nation gripped by fear, who ultimately chose to give up their civil rights and plunged the whole world into war." Let's see, in a post-9/11 America, the Bush administration heightens the peoples' fear factor with the Weapons of Mass Destruction straw man, which leads to the imposition of such anti-civil libertarian measures as the Department of Homeland Security, the Office of Information Awareness and the so-called Patriot Act, intolerance towards and persecution of anyone questioning what is transpiring becomes more acceptable and an unjustifiable war is widely supported without question.

Note: For those not familiar with the Real News 24/7 position on the World War II era, it is our position that the research indicates that Communism, Nazism, and Zionist were all Jewish-financed and Jewish-operated movements (Nazism was basically led by half-Jews) -- and that World War II broke out when infighting occurred between the super-criminals on all sides: that is, between Stalin (Communism), Hitler (Nazism), and Roosevelt and Churchill (Zionism). Strangely enough, the overt Zionist leaders were found at times working behind the scenes with Nazism. While this may seem hard to swallow at first glance, watch for more special reports.* We have not been able to decide which faction -- the so-called Anti-Defamation League of B'nai B'rith types or the Neo-Nazi groups like the Aryan Nations -- is more unsettled by our take and by the research we are bringing forth.

* See the special report Jews Against Zionism: The Hidden Protest for more information on Zionist collaboration with the Nazis.