Zundel in Prison: Truth, Lies, and the Holocaust

A special one hour radio show focusing on "Ernst Zundel in Prison: Truth, Lies, and the Holocaust"  aired Sunday Night, July 31, 2005, at 9 PM eastern time -- on a 50,000 watt talk station: 550 AM WKRC radio and also LIVE online at www.55krc.com . Check back and this show will eventually be available for download in mp3 format from this website and this page.

See near the bottom of this page for a link to an EXTENSIVE Library of ONLINE books and pamphlets about this controversy.

20th Anniversary of the Great Holocaust Trial
by Michael A. Hoffman II
This is an excellent primer article for people to understand why Ernst Zundel has been put in prison by the power of the worldwide organized Jewish Lobby

Questions and Answers About World War II and The Holocaust
by Michael A. Hoffman II
This is a very fine piece which goes into important distinctions regarding the Hollywood Versions of the Holocaust vs. what really happened in what is called "The Holocaust."

Important Articles surrounding the Zundel Story
-- What Zundel said, wrote, and published that got him landed in Prison

Who is Ernst Zundel -- and Why is he in Jail?
by Mark Weber (written in 2003 shortly after Zundel was arrested for nothing in Tennessee

The Holocaust on Trial: The Case of Ernst Zundel by Robert Lenski
A Review by Mark Weber

Testimony on the pamphlet "Did Six Million Really Die?"
Charles Weber on what was said at the 1988 Zundel Trial

The Zundelsite - Dedicated to the work of Ernst Zundel and Ingrid Rimland
Defending the man who has been imprisoned in Canada, the United States and Germany--from 2003 to 2005, so far--for questioning the Hollywood Version of the Holocaust. (Be sure to check the articles on the Zundelsite concerning Historical Revisionism, which can be found in links at the right hand column.)

The Liberation of the Camps: Facts vs. Lies
by Theodore O'Keefe

What is Holocaust Denial?
-- pamphlet by the Institute for Historical Review

Inside the Auschwitz "Gas Chambers"
by Fred Leuchter

The U.S. Holocaust Museum -- A Costly and Dangerous Mistake
by Theodore O'Keefe

Ernst Zundel: A Profile
A timeline

(Good night, the debate over whether Zundel is reasonable is over, and Zundel has won -- now we'll just have to wait and see how long the Jewish-controlled mass media can keep the public from finding out. By the way, our firm conclusion after reviewing the evidence: Zundel has been put in jail by World Class Criminals and Liars whose ongoing scam requires that the public be prevented from learning that Zundel is reasonable, scholarly, heroic and truthful.) 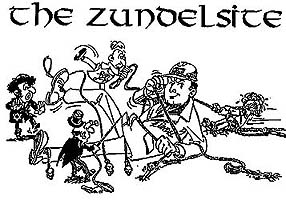