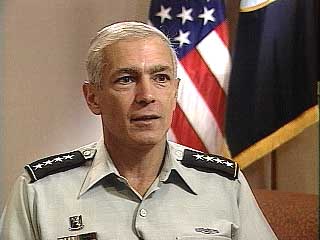 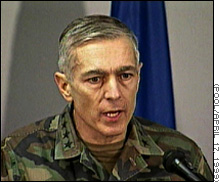 For those in the audience who did not have a flier, I began to explain the picture which showed General Clark in a congratulatory handshake with Hashim Thaci, leader of the KLA, which under the noses of KFOR had murdered or ethnically cleansed thousands of Kosovo Serbs and had destroyed more Orthodox Christian churches and monasteries than were destroyed in 500 years under the Ottoman Empire. Next to Thaci was Bernard Kouchner, Chief U.N. administrator in Kosovo, British General Sir Michael Jackson, and Agim Ceku, who commanded the Croatian Army in "Operation Storm" that ethnically cleansed 250,000 Serbs from Krajina and murdered thousands and who now commands the Kosovo Protection Corps (KPC), the thinly disguised successor to the KLA. It should be noted that the KLA, with whom we allied ourselves, at one time was designated by the U.S. State Department as a terrorist organization. Of course, this is the same KLA about whom Senator Joe Lieberman said: "The United States of America and the Kosovo Liberation Army stand for the same values and principles . . . Fighting for the KLA is fighting for human rights and American values." (Washington Post, Apr.28, 1999). Clark at Borders bookstore, Pentagon Center Mall, 17 Jul 2001 by Colonel George Jatras, USAF (Ret.)

At the beginning of the Kosovo conflict, CounterPunch delved into the military career of General Wesley Clark and discovered that his meteoric rise through the ranks derived from the successful manipulation of appearances: faking the results of combat exercises, greasing to superiors and other practices common to the general officer corps. We correctly predicted that the spinnable realities of a real war would cause him to become unhinged. Given that Clark attempted to bomb the CNN bureau in Belgrade and ordered the British General Michael Jackson to engage Russian troops in combat at the end of the war, we feel events amply vindicated our forecast. With the end of hostilities it has become clear even to Clark that most people, apart from some fanatical members of the war party in the White House and State Department, consider the general, as one Pentagon official puts it, "a horse's ass". Defense Secretary William Cohen is known to loathe him, and has seen to it that the Hammer of the Serbs will be relieved of the Nato command two months early. Gen. Wesley Clark Fights On and On [freerepublic.com]

No sooner are we told by Britain's top generals that the Russians played a crucial role in ending the west's war against Yugoslavia than we learn that if NATO's supreme commander, the American General Wesley Clark, had had his way, British paratroopers would have stormed Pristina airport threatening to unleash the most frightening crisis with Moscow since the end of the cold war.

"I'm not going to start the third world war for you," General Sir Mike Jackson, commander of the international K-For peacekeeping force, is reported to have told Gen Clark when he refused to accept an order to send assault troops to prevent Russian troops from taking over the airfield of Kosovo's provincial capital.
Robertson's plum job in a warring NATO

Mary Robinson, the UN human rights commissioner, said NATO's bombing campaign had lost its "moral purpose". Referring to the cluster bomb attack on residential areas and market in the Serbian town of Nis, she described Nato's range of targets as "very broad" and "almost unfocused". There were too many mistakes; the bombing of the Serbian television station in Belgrade - which killed a make-up woman, among others - was "not acceptable". No blood money by Richard Norton-Taylor on the moral confusion of Nato, which refuses compensation to the innocent people it bombed.

NATO justified the bombing of the Belgrade TV station, saying it was a legitimate military target. "We've struck at his TV stations and transmitters because they're as much a part of his military machine prolonging and promoting this conflict as his army and security forces," U.S. General Wesley Clark explained--"his," of course, referring to Yugoslavian President Slobodan Milosevic. It wasn't Milosevic, however, who was killed when the Belgrade studios were bombed on April 23, but rather 20 journalists, technicians and other civilians.

Clark's logic is exactly the same as that of the death squad commander who orders the assassination of a journalist or a publisher whose opposition newspaper supports the goals of a guerrilla movement. The targeting of the studio was a war crime, perhaps the most indisputable of several war crimes committed by NATO in its war against Yugoslavia.
Legitimate Targets? How U.S. Media Supported War Crimes in Yugoslavia

A panel of 16 judges from 11 countries at a people’s tribunal meeting in New York June 10 before 500 people found U.S. and NATO political and military leaders guilty of war crimes against Yugoslavia in the March 24-June 10, 1999 assault on that country. WAR CRIMES TRIBUNAL FINDS U.S. AND NATO GUILTY

ROBERT NOVAK: Members of Congress who, during their spring recess, met in Brussels with Gen. Wesley Clark, the NATO supreme commander, were startled by his bellicosity. According to the lawmakers, Clark suggested the best way to handle Russia's supply of oil to Yugoslavia would be aerial bombardment of the pipeline that runs through Hungary. He also proposed bombing Russian warships that enter the battle zone. The American general was described by the members of the congressional delegation as waging a personal vendetta against Yugoslav President Slobodan Milosevic. "I think the general might need a little sleep," commented one House member.-Balkan News from The Progressive Review

"I am a kind of hard-nosed, dusty boots armor man who knows what it takes to maneuver men," Clark said.

Clark is a longtime friend of Clinton and his current position has more to do with his political flexibility than his war making prowess. He is reportedly referred to as the " Supreme Being " by the more earnest soldiers under his command.
From ... did anyone else notice that Clark was commanding Fort Hood, Texas during the Waco incident? Most (if not all) of the illegal military hardware and personnel used against the women and children at Waco came from Fort Hood, Texas

"Known by those who've served with him as the "Ultimate Perfumed Prince," he's far more comfortable in a drawing room discussing political theories than hunkering down in the trenches where bullets fly and soldiers die." - CLARK AND VIETNAM - DEFENDING AMERICA by David H. Hackworth, April 20, 1999

"He says the basic problem with US armed forces is that selfless grunts willing to die for their country are being sold out by selfish "perfumed princes" like Colin Powell and Norman Schwartzkopf with the blessing of "morally corrupt" political leaders from the president on down. He says we can have a far more efficient fighting force and still cut the military budget from US$300 billion to $150 to $200 billion, if we consolidate our four military services into one, pull out of Korea and Europe (which can defend themselves), and stop procuring expensive high-tech weapons systems we don't need. Noise - Hackworth talks about his new book Hazardous Duty, which he describes as an attempt to "wake up America" about our urgent need to reform the military.
Total length: 15 minutes, 17 seconds ... David Hackworth's home page

What role did Nato's top commander have in the FBI's ill-fated raid on the Branch Davidians compound outside Waco, Texas? Was Clark at Waco?

Clark was born on 23 December 1944 and grew up in Little Rock, Arkansas. He is married to the former Gertrude Kingston of Brooklyn, New York. He and his wife have one son, Wesley, who lives in California. *

Military Bio for GEN Wesley K. Clark USA [eucom.mil] "... General Wesley K. Clark, U.S. Army, became the Commander in Chief of the United States European Command on 10 July 1997....a 1966 graduate of the United States Military Academy at West Point, New York, where he graduated first in his class. He holds a master's degree in Philosophy, Politics and Economics from Oxford University where he studied as a Rhodes Scholar (August 1966-August 1968). He is a graduate of the National War College, Command and General Staff College, Armor Officer Advanced and Basic Courses, and Ranger and Airborne schools. General Clark was a White House Fellow in 1975-1976 and served as a Special Assistant to the Director of the Office of Management and Budget. He has also served as an instructor and later Assistant Professor of Social Science at the United States Military Academy. Clark grew up in Little Rock, Arkansas"

Gen. Wesley K. Clark (ret.) [http://wesleyclark.h1.ru/] ... JUN 26 - NOV 5, 2000 Gen. Clark: According to The Times, former SACEUR Gen. Clark "has fired a bitter parting shot" at his Pentagon bosses, suggesting that the United States is being weakened by fear of battlefield casualties. At a ceremony marking his retirement from the U.S. Army last Friday, Gen. Clark reportedly unleashed a thinly veiled attack on Washington leaders for shying away from bold action that could lead to loss of life. "What better to fight for than what you believe in and value?", he asked at the military ceremony at Fort Meyer, Washington. The time had come for the army leadership to develop "a new mentality," he said, adding: "Give us a mission and send us in." The newspaper notes Gen. Clark is now writing his memoirs and suggests these are sure to bring him into dispute again with the Pentagon and his former superiors. The July 3 edition of U.S. News & World Report notes Gen. Clark has obtained a job analyzing technology firms for an investment bank in Arkansas and has several corporate-board offers. But the weekly adds, "the worry in Washington is whether Clark, said to have railed on Pentagon brass for micromanaging the (Kosovo conflict), will publicly unload on them."

Interview with General Wesley K. Clark (Ret.) on Security Issues - August 8, 2000 -- Gen. Wesley K. Clark, U.S. Army Ret., was the Supreme Allied Commander in Europe from July 1997 to May 2000. Clark was in overall command of NATO's military forces in Europe and commanded the alliance's military response to the Kosovo crisis -- Operation Allied Force. He is now with the Stephens Group Inc. in venture capital and a senior advisor with the Center for Strategic and International Studies (CSIS).

What is Clark doing now?

Genocide or Veracicide Will NATO's Lying Ever Stop? by Stephen Gowans