The Vindication of Senator Joseph McCarthy

Today as relevant as in his day—

"How can we account for our present situation unless we believe that men HIGH in our government are concentrating to DELIVER US TO DISASTER?" 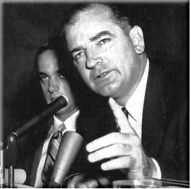 Nearly fifty years after his death, Senator Joseph McCarthy still is making news—and still is hated by the Left, smeared by the controlled news media and revered by Americans in the know.…

Pat Buchanan: Of 'Treason" and Tailgunner Joe "America's young should ask themselves: If Joe McCarthy was such a monster, why did Joe Kennedy back him, the Kennedy girls date him, Robert Kennedy work for him and JFK defend him as a "great patriot" in his year of censure? And why was McCarthy asked to be the godfather to Bobby Kennedy's firstborn?" McCarthy's "witches" "Witch-hunt? The high-profile cases cited by McCarthy — Owen Lattimore, John Stewart Service, and Philip C. Jessup — all ended with the senator’s charges being validated." Revisionist critics misrepresent McCarthy's legacy "Harry Truman dropped atomic bombs on two defenseless cities of a prostrate nation and sent 2 million Russian prisoners back to Stalin to be murdered in Operation Keelhaul. Yet Truman remains a hero to those who despise McCarthy with an undying hatred."  Sen. McCarthy and the Khazars' curse "If the late Sen. Joseph McCarthy had been wrong about Communist infiltration in the 1950's, wouldn't he have been refuted and forgotten? Instead, 50 years later, media connected to Khazar (Jewish) bankers and their allies continue to vilify him, indicating that he struck a nerve."  The hidden truth about Joseph McCarthy "McCarthy’s enemies—supposed champions of civil liberties—tapped his phone, intercepted his incoming personal mail, placed a paid spy in his office, and illegally released his tax returns to the press (resulting in a large refund!)."

Q. So, was McCarthy right or wrong about the State Department?

A. He was right. Of the 110 names that McCarthy gave to the Tydings Committee to be investigated, 62 of them were employed by the State Department at the time of the hearings. The committee cleared everyone on McCarthy's list, but within a year the State Department started proceedings against 49 of the 62. By the end of 1954, 81 of those on McCarthy's list had left the government either by dismissal or resignation.

McCarthyism: no longer a dirty word  "The deciphered Venona cables confirm that the American Communist Party successfully established secret caucuses in government agencies throughout the 1930’s and 1940’s. They prove that 349 Americans had covert ties to Soviet intelligence – much as McCarthy had charged."

Venona Project From the official National Security Agency website. The Venona Secrets: Exposing Soviet Espionage and America's Traitors Read excerpts from this book on the Communist infiltration and subversion. Book reviews: Venona and The Haunted Wood "Venona, the product of two American historians, and The Haunted Wood, a collaboration of an American historian and a Russian KGB operative–turned–journalist, provide crushingly authoritative answers to questions that have lingered since the days when the charges and countercharges hurled by ex–Communists and alleged Communists riveted the nation’s attention. How prevalent was the treason committed by Americans on behalf of Stalinist totalitarianism? How pervasive was Communist influence in American government? Above all, who told the truth and who lied?" (Real News 24/7: We obviously do not agree with the reviewer's conclusions and offer this merely for information value. Indeed, the review largely disproves the conclusions!) McCarthy and his colleagues "Joe McCarthy has made a real and lasting contribution toward the preservation and perpetuation of the free world in his fight against the menace of internal subversion. His death was as much as that of a soldier fighting in the ranks for human liberty and eternal truth as if it had occurred on the field of battle and been inflicted by bullet, bayonet, or shell...."

Communists coined "McCarthyism" "Now to the Communist version of the word 'McCarthyism,' which they had just coined.…The first time I actually saw the word in print was in the Daily Worker newspaper. This was the Communist Party newspaper published in New York City which carried orders to American Communists from the Soviet Union." The real McCarthy record Same author as the one who wrote 40 questions and answers above; same format as above, but includes some different material.

America's Retreat From Victory "The general picture of our steady, constant retreat from victory, with the same men always found at the time and place where disaster strikes America and success comes to Soviet Russia, would inevitably have caused me, or someone else deeply concerned with the history of this time, to document the acts of those molding and shaping the history of the world over the past decade." (The first four chapters of McCarthy's important book outlining foreign policy betrayal during and immediately after World War II.)

Joseph McCarthy speaks in 1954 to the Chicago Irish Fellowship Society (Audio file) A brief (12 minutes) but powerful talk on the fight against treason. The late, great senator in fine form.