We have done some polling of Boy Scouts and parents, and parents of
Boy Scout age. We hear overwhelming support for the policy.
—Gregg Shields, Boy Scouts' spokesman on its "gay" ban

Venerable U.S. institution under
fierce attack from all sides
Boy Scouts threatened with extinction by enemies 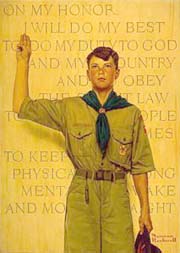 For nearly one hundred years the Boy Scouts of America (BSA) has held an honored place in American society, as it helped shape the character of countless young men with its oath to "do my best to so my duty to God and my country." Of late, however, it has been the target of an exceedingly malicious assault by atheists, homosexuals and social engineers for its commitment to the highest moral standards. This has come from without by funding restrictions and unjust judicial decisions and from within by internal subversion. And make no mistake, the attack on the BSA is an attack on America in microcosm—by the undermining of our religious life and the holding up of traditional values for contempt. As the BSA goes, so goes America!

California: "Religious" Boy Scouts being pushed out of park "U.S. District Judge Napoleon Jones Jr. found by 'overwhelming and uncontradicted evidence' that the Boy Scouts are a religious organization and received preferential treatment by the city council as to its perennial lease of the 18-acre camp at the park." (Real News 24/7: Talk about taking the "separation of church and state" to places Thomas Jefferson would never have envisioned. Jones is alleging the totally nondenominational BSA is a religious group. He should be recalled for either incompetence or hostility towards religious principles, whichever applies. Please click the link "Boy Scouts" at the the above article for several other stories concerning the plight of the Scouts.)

Pennsylvania: Boy Scout council "devastated" by United Way cuts "On Thursday, the United Way of Southeastern Pennsylvania voted to cancel the second half of a $400,862 grant for the Cradle of Liberty Council because the council reneged on its adoption of a nondiscrimination policy against gays." (Real News 24/7: Note the comments of the council's board chairman, who sounds like a destructive change agent.)

Connecticut: Court rules against Scouts "According to the decision, Connecticut can keep the Boy Scouts off its list of charities receiving donations collected from state workers because the Scouts’ ban on homosexuals violates the state’s anti-discrimination law." (Real News 24/7: The last paragraph of the article is significant as it points an important parallel between this decision and the earlier one in which the U.S. Supreme Court shot down a Texas anti-sodomy law.)

Rhode Island: Troops quietly defy Scout policy on "gays" ""We said we would not consider (sexual orientation) as reason to exclude someone,' [Assistant Scoutmaster Allen] Dennison said, 'and we're willing to take the consequences up to and including disqualification. Morally straight means doing what is right, and what is right is clearly not to peddle hate,' he said."

(Real News 24/7: Subversives like Dennison push the "politically correct" line that to oppose sodomy—even on religious grounds—is "hate." He has the audacity to twist the English language so as to make it "morally straight" to support sexual perversion. Clearly, for the BSA to survive in its true form, these termites must be rooted out before they destroy it. Please contact the Scouts and urge them to remove Dennison and others like him before it's too late!)

To help our readers truly appreciate the depth of the problem, we've included the articles and op/eds page from the homosexual Inclusive Scouting website. From the length of the list of articles, it is clear that this battle for the soul of Scouting is at the very heart of the culture war being waged against our country. (Inclusive Scouting, which sports as its logo a knot in the homosexual "rainbow colors," state that it was "formed in response to the membership policies of the Boy Scouts of America that discriminate based on religion and sexual orientation, and include both individuals and organizations who want to find ways to both support the scouting program, and to make the benefits that scouting has to offer equally available to all youth." Their message, behind the high-flown rhetorical spin, is: "Let us in, so we can subvert and pervert your boys!)

Regrettably, the Girl Scouts have already succumbed to the pressure and are no longer worthy of support. In "Beyond crafts and cookies, Girl Scouts are prospering," New York Times reporter Lisa Foderaro writes:

For its part, the Girl Scouts do not prohibit lesbians from becoming members or leaders. Whether heterosexual or homosexual, members and leaders may not promote a particular sexual orientation or display any sexual behavior.

As for religion, a member can substitute her own word for God in the Girl Scout promise. If a girl were an atheist but was still comfortable reciting the Girl Scout promise, the organization "would not conduct an inquisition about what was behind that," said Sharon Woods Hussey, senior vice president of membership, program and research for Girls Scouts of the U.S.A. (Presumably, this means if a girl feels "comfortable" substituting Gaia, Lucifer or Gummi Bear for God in the promise the GSA doesn't have a problem with it. The article, by the way, is proudly carried on the Gay and Lesbian Political Action and Support Groups website. )

To voice your concern, please visit the Girl Scouts of America website.

In response to this surrender of direction by the Girl Scouts leadership, a group has been organized in line with the GSA's wholesome original goals. The website of American Heritage Girls describes it as "a scouting program for girls that supports the traditional values of God, family and country. (For more information about American Heritage Girls, see "Conservative alternative to Girl Scouts builds membership.")

A high level of vigilance and fortitude now must be exhibited by the BSA or, like its feminine counterpart, it will fall by the wayside.