Mikhail Gorbachev, the last dictator of the Soviet Union, was successfully projected by Western politians and news media as a new sort of non-threatening Communist. When he called for ostensibly radical reforms in the Soviet system and in its dealings with the United States and other non-Communist countries (perestroika and glasnost), it was even suggested that he might be a secret lover of the American form of government.

But despite the boundless adulation he was afforded, including being named Time magazine's "Man of the Year" in 1987 and "Man of the Decade" for the 1980s and receiving the Nobel Prize and (most ironically for someone who enslaved people) the Four Freedoms Award (both in 1990) and the continued cliams by some that he wasn't really a Communist deep down inside, Gorbachev has never wavered one iota in his commitment to Bolshevism. (True, sometimes he has wrapped himself in the "social democrat" banner, but as anyone familiar with European politics knows, social democrat = hard left.) While the deceitful mass media was singing his praises as a freedom-loving ex-Communist, Gorbachev himself has been much more candid about where he stood—of course, this went largely unreported (no need to let the people know the truth about him!).

…this is the same Gorbachev who, a few short years ago (November 1987) proclaimed: "In October 1917, we parted with the Old World, rejecting it once and for all. We are moving toward a new world, the world of Communism. We shall never turn off that road." (Emphasis added.) "Perestroika," he said then, "is a continuation of the October Revolution."

After the alleged collapse of the Soviet Union, which he is credited as having initiated, Gorbachev became a columnist/"activist" in the West. (The works of KGB defector Anatoliy Golitsyn, who correctly predicted a series false reforms in Iron Curtain nations in 1984—a year before the Gorbachev's rise, are vital for understanding what went on. Naturally, his books have been suppressed, but are available.) He has used his Gorbachev Foundation to espouse globalism and "interdependence," while he Green Cross International as a backdoor method to promote collectivism in the name of the enviroment. The columns have been his bully pulpit to advance these causes and to lecture Western leaders from his "moral high ground."

In his latest installment of tyrant-plays-elder-statesman, Gorbachev speaks out against U.S. policy in Iraqi War. and the "end of democracy" in America.The former Soviet prime minister criticized the Bush Administration for "imperial behavior" and for having "cast aside" international law. Not surprisingly, Gorbachev showed great support for the United Nations (Marxism-Leninism has always held world government as a large part of its ultimate goal and the U.N. provides the framework). For all his international socialist posturing about how U.S. failings, Gorbachev has blood on his hands for a Soviet military misadventure, but a brutal misadventure.

From 1979 to 1988 the Soviet Union sought to impose Communism on the people of Afghanistan by means of an armed invasion. Over one million Afghanis died and millions more left wounded or homeless, while 15,000 of the aggressors were killed. Upon assuming power in 1985 Gorbachev continued the Soviet's brutal war against Afghanistan; the controlled Western news media conveniently ignored the unspeakable atrocities occurring, focusing, rather, on the fact that the Red Army finally ended the war under his watch (this was because the Soviet soldiers were taking a beating and not making any real progress against determined and elusive foes).

Despite the dereliction of the media in covering the war properly, the atrocities were very real and continued with Gorbachev. The following examples illustrate the reign of terror to which the Afghani people were subjected:

—it's like hunting rabbits." (For the entire report containing this quotation, go to the CNN's Cold War—Episode 20:"Soldiers of God".)
—uniquely diabolical—involved the dispersal of landmines 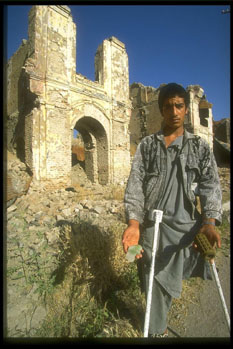 that were fashioned to look like toys. Far from the atrocities the Red Army claimed were commited in the heat of the moment out of retaliation, these were cold blooded and calculated. Some were shaped like butterflies and made of translucent plastic, were especially attractive to children. (According to the International Commitee to Ban Landmines: "Some antipersonnel mines, such as airborne butterfly mines, are specifically designed to attract children.[emphasis added]" The rationale used to justify their use is to prevent children from carrying guns in a guerilla war for the present and for the future. See www.icbl.org for more information.)  As a result, many youngsters were killed, suffered loss of limb or otherwise maimed by them. (Consistent with their lack of coverage of other atrocities, mention of this execrable practice in American media was virtually nonexistent. One notable exception to the rule was The New American, which published advertisments for Afghani relief that explained the practice and showed photos of young victims. For more information, contact the magazine at its website, www.thenewamerican.com.)

The ongoing deception regarding Mikail Gorbachev is a powerful indictment of Western leaders and news media. In some cases, this was because of disinformation and ignorance as to his true person. In others, it was due to negligence

—sometimes willful negligence—to follow up on leads that would have shed light on him or a reluctance to think independently, for fear of losing a job.

But when these and other possible explanations are taken into account, there remains a small, undeniable hardcore group of traitors whose puffing up of Gorbachev was based on their ideological kinship with him. That he is able to pontificate and be taken seriously by so many is proof positive of the thorough unworthiness of the Establishment news media and the need for Americans to shake off their destructive influence. Nothing short of future of the Republic is at stake.