The Last Reigning Ruler of the House of Hapsburg, forced to abdicate in 1918
due to the pre-planned, contrived pressure of the top hierarchy of Judeo-Masonry

He reigned as Charles I, Emperor of Austria (and, also, Charles IV, King of Hungary) from 1916 until 1918, when Austria was proclaimed a republic by the Freemasonic forces in the empire, backed by the international Jewish Banking houses. At the same time, major monarchs were being removed all over the world, including Czar Romanov of Russia, -- so that these paternal monarchs could be replaced by brutal agents of Judeo-masonry, using the mask of either "a republic" or, in Russia, "communism". Emperor Charles I renounced this new form of government, but did not abdicate, due to the sacred oath he had taken at his coronation.  He spent the remaining years of his short life attempting to restore the Catholic monarchy. This was not a mere "power struggle." Emperor Karl was the last reigning major world leader who consciously understood his responsibility as a temporal ruler to recognize and uphold the Kingship of Christ over his empire. He died in 1922 of pneumonia. According to the book, The Incorruptibles by Joan Carroll Cruz, Carl I's body was found incorrupt in 1972, a sign of Divine favor.
(Be sure to see write-up at the end of the pictures on this page) 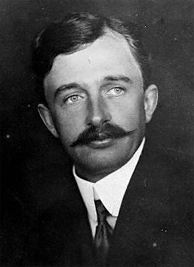 Photo of Emperor Karl I of Austria, circa 1918 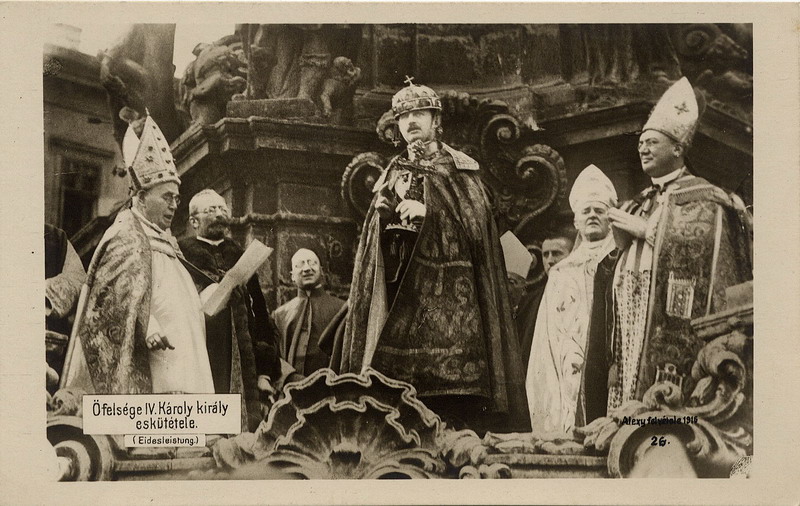 Photo of Karl I taking his sacred oath as part of the coronation ceremonies in December 1916.

The movie, "The Lord of the Rings", based on the writings of J.R.R. Tolkien restored the imagery of this type of scene to public consciousness in 2003, in one of the last scenes of "The Return of the King", part three of the "Lord of the Rings" movie trilogy. It was this form of government, the unity of the true Church with a Catholic head of state, which the top hierarchy of Judeo-Masonry had plotted to destroy for centuries. With the destruction of this, and major monarchies of all types (except the insipid, freemasonic British Monarchy), a major obstacle was cleared so that the cruel agents of Judeo-Masonry could begin extending their dominance more quickly over the world during the remainder of the 20th century, and into the 21st century so far (this is posted in June, 2007). 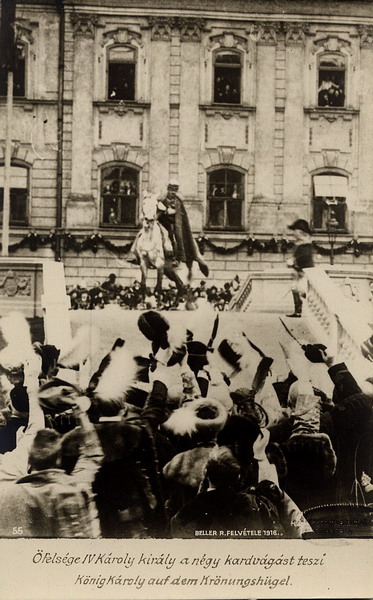 This is a Hungarian photo of Emperor Karl I on horseback on his day of coronation. Notice that the card refers to Karl I under his Hungarian title, King Karoly IV. 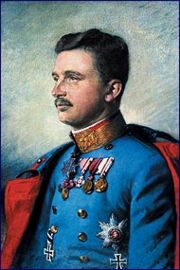 Painting of Emperor Karl I featuring some of his military regalia. He had served as an officer and then as Supreme Commander of the Austrian army. 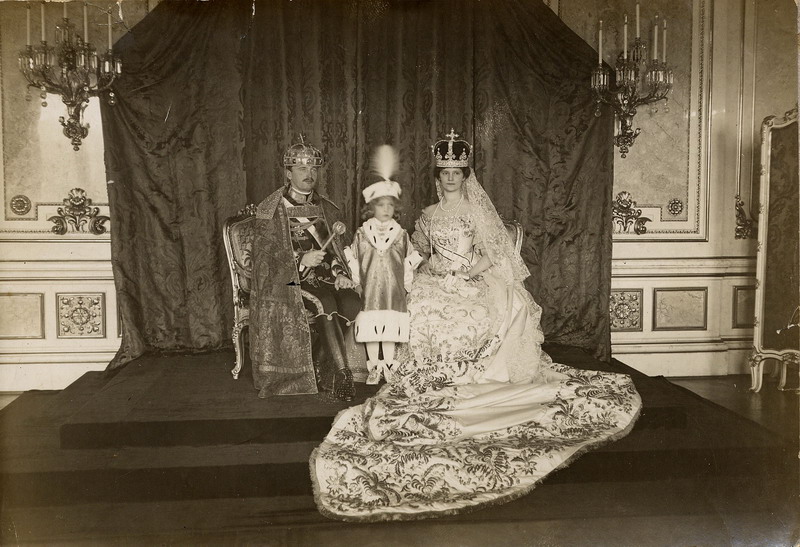 King Carl I and his wife, Zita, along with Crown Prince Otto, one of their eight children; taken on the day of the coronation in December, 1916.
Empress Zita lived to be 96, dying in March of 1989, outliving her husband by 67 years. She wore black every day of her life after Karl I died, as a sign of her loyalty and mourning. 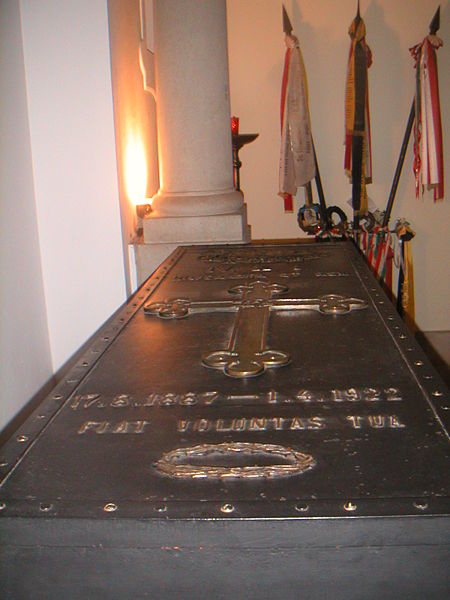 Background to the Life and Career of Emperor Karl I

In 1903, Emperor Franz Joseph of Austria had sent one of the Cardinals from his empire into the conclave which followed the death of Pope Leo XIII with specific instructions to exercise the veto against Cardinal Rampolla if it should look like he was gaining momentum to be elected to the Papacy. Franz Joseph did his because he felt that Rampolla would be too accommodating to the Masonic Republic of France, and perhaps had information that Rampolla was too friendly with other elements of Freemasonry, according to some sources. In any case, the veto was an ancient tradition by which a Catholic Emperor could urge the cardinals in the conclave to pass over one of the candidates. The cardinals were not bound in any way by such a veto, but it was generally taken as a grave matter.

In fact, as Rampolla garnered early support, the Austrian Cardinal rose to invoke the veto on behalf of Emperor Franz Joseph von Hapsburg, grand-uncle of Karl von Hapsburg. (The Hapsburgs could trace their empire, in some way, back to the coronation of Charlemagne in 800 AD.)

In "The Hidden Hand", the Russian Count Cherep-Spiridovich maintains that the assassination of Franz Ferdinand, Archduke of Austria, which took place in Sarajevo in 1914, was in retaliation for this veto of Rampolla by Emperor Franz Joseph, as the Freemasons had favored Rampolla's election. In any case, the assassination of Franz Ferdinand was used as the pretext for World War I.

At the end of World War I, the "Hidden Hand" of Judeo-Masonry was toppling the major Catholic monarchies, as well as the monarchy of the Romanovs in Russia. Sinister agent of international Jewish banking and Freemasonry, President Woodrow Wilson of the USA, insisted as part of his infamous "14 points" that republics be inaugurated in all parts of the Hapsburg empire, as part of the plot to destroy the Hapsburg monarchy.

King Karl I, faced with a fait accompli as the freemasons went into action all over his empire, amply funded by the international Jewish banking houses, which at this point had become unchallenged financial masters of the world, tried to save the empire, but could not. He resolved in 1918 to have no part in administering the new state, but he refused to abdicate his throne, as he was bound to it by sacred oath.

While the freemasonic historians have ignored Emperor Karl von Hapsburg, or denigrated him, others had a different view. While the Judeo-Masonic plots and intrigues resulted in over 70 million deaths, mostly of Christian Europeans, as well as tens of millions more murdered in China after WW II, the historians lionize key players who brought about this carnage, such as Wilson, FDR, Churchill, and Stalin. Men of principle and peace, such as Czar Romanov and Emperor Karl Von Hapsburg are treated as "shabby" or "sinister" next to those agents of the anti-Christian revolution. The truth is exactly the opposite.

The reader should be warned that Wikipedia is a Jewish run site with a team full of censors who daily remove and edit information from Wikipedia which is not in line with the history to be known in the New World Order. Also, notice that wikipedia is given a place of prominence by Google in response to searches.

Nevertheless, whoever had written and edited the article on Karl I which appeared on Wikipedia on June 10, 2007, had done a good job. Here is a quote from that page:

However, others have seen Charles as a brave and honorable figure who tried as emperor-king to halt World War I. The English writer, Herbert Vivian, wrote: "Karl was a great leader, a prince of peace, who wanted to save the world from a year of war; a statesman with ideas to save his people from the complicated problems of his empire; a king who loved his people, a fearless man, a noble soul, distinguished, a saint from whose grave blessings come."

Furthermore, Anatole France, the French novelist, stated: "Emperor Karl is the only decent man to come out of the war in a leadership position, yet he was a saint and no one listened to him. He sincerely wanted peace, and therefore was despised by the whole world. It was a wonderful chance that was lost."

All of these various viewpoints give weight to the words of Pope Saint Pius X during an audience with a young Charles: "I bless Archduke Charles, who will be the future Emperor of Austria and will help lead his countries and peoples to great honor and many blessings -- but this will not become obvious until after his death."

The End of this tribute page to Emperor Karl I