After viewing, immediately below, these historic photos taken in 1958 by the AP wire service, and after reading the factual account concerning some of the events and circumstances surrounding these photos -- reprinted from the booklet Ab Initio -- come back here to read the analysis of Mr. Gary Giuffré, the prime mover during the last two decades behind research into what happened at the 1958 Papal Conclave, concerning the significance of this pivotal moment in modern history. Read it here.

October 26, 1958
Pivotal Moment in the Eclipse of the Church
Judeo-Masonry takes control of the Vatican Structures 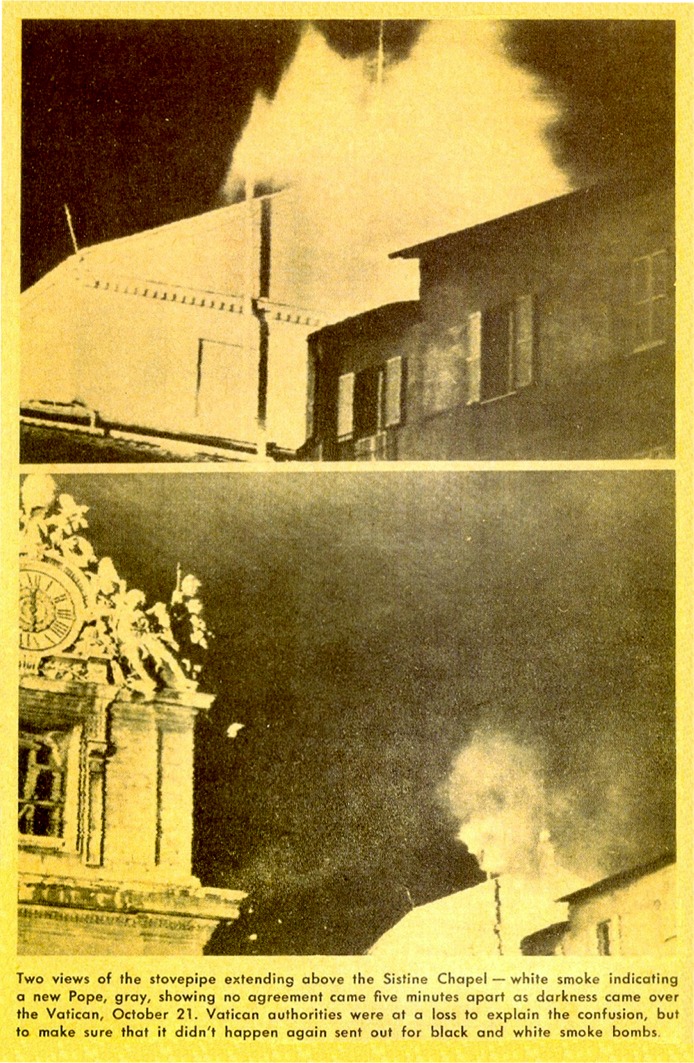 [Note from this website’s publishers: The above page is reproduced from an almost forgotten pamphlet by the late Catholic journalist, Joseph A. Breig; the pamphlet was entitled, "Vicar of Christ; Pope John XXIII," published in December, 1958 by Summit Press Inc., Saint Paul, Minnesota, page 23.

Breig, like almost everyone else, had no misgivings at the time about the announced outcome. Undoubtedly he did not even consider the possibility of dire threats against those inside the conclave and against the Church itself which would have provided the key to understanding the abrupt change in the smoke signals on that fateful evening of Apocalyptic portent.

Breig's "on the spot" written record testifies to the clear and unmistakable white smoke which billowed from the Sistine Chapel stove pipe from 5:55 PM until 6 PM on October 26, 1958.

In a sentence perhaps more pregnant with unintended meaning than any other written in the 20th century, Breig penned these words: "Two views of the stovepipe extending above the Sistine Chapel -- white smoke indicating a new Pope, gray, showing no agreement came five minutes apart as darkness came over the Vatican . . ." (emphasis added by this website)

At that juncture, according to the testimonies we believe to be accurate, the struggle at the Sistine Chapel stove ended with wet straw being shoved into the stove causing the smoke to change from white to black. As this was happening, deadly threats were being issued against the new Pope, his family, bishops behind the Iron Curtain, and the existence of the Vatican state itself. From that moment until this, in August 2005, the counterfeit church has maintained its control over the Vatican structures, thus eclipsing the true Church, fulfilling the 1847 prophecy of Our Lady of La Salette, "The Church will be in eclipse." Further note regarding the typo in the caption above: The "October 21" is an obvious misprint from the context of the Breig pamphlet and from all the other reports published about this phenomenon from Italy to Ireland to the USA; the conclave began on October 25, 1958, and the white smoke rose from the Sistine chimney for the first time at 5:55 PM on October 26, 1958. So the date in this caption should read, "October 26." ]

Immediately below is one summary and analysis of the significance of what happened at 6 PM, October 26, 1958 in Vatican City. The passages are taken from the booklet Ab Initio (translated: From the Beginning) by A.D.O. Datus, written circa 2001 A.D. Here are the passages from Ab Initio:

It is a matter of historical record that on 9th October, 1958, Pope Pius XII (Cardinal Eugenio Pacelli) died at 3:52 a.m. Rome time. The conclave to elect his successor was held in Rome between the 25th and 28th October in the same year.

It is equally a matter of record that at about 6:00 p.m. on Sunday 26th October following the conclusion and counting of the fourth ballot, the traditional white smoke signifying the election of a pope, was emanating from the chimney above the Sistine Chapel. The record further establishes that the white smoke thus emanated for a full five minutes, followed by an announcement from Vatican Radio that sufficient time had elapsed and that the new pope was probably being honoured and the rites of thanksgiving for his election were also probably being performed. This was confirmed immediately by an official of the Conclave in a phone conversation with Prince Chigi, the Marshall of the Conclave, as recorded in prominent Italian newspapers.

The record also shows that over a quarter of a million people witnessed the white smoke billowing upwards, strongly and clearly in the evening light. The record then shows, that mysteriously and most unusually, the white smoke turned momentarily to grey and then back to white again. The crowd that had gathered below roared its approval. But the minutes passed and sadly, no pope appeared.

What went on at that conclave remains a great mystery, but what is certain is that the white smoke did not emerge from the same chimney again until the 28th October – three days later, when Cardinal Angelo Roncalli, Patriarch of Venice, was offered to the City and the World as the elected pope, rejoicing under the name of John XXIII. The record of the history of the popes, the Annuario Pontificio also clearly states that the name John XXIII was the name chosen by a notorious antipope, one Baldassare Cossa (1410-1415), and which, strictly speaking, should not have been available for use by anyone else; its re-use only raised more questions than it answered.

[Note from the website’s publishers: No Pope had taken the name John since the notorious antipope Baldassare Cossa designated himself "John XXIII" around the year 1410. Now, in 1958, we have a man presented as Pope choosing the name and accompanying number of a notorious antipope. Twenty years later, two successors to John XXIII would again do something very strange and unprecedented: they chose two names instead of one: John Paul I and John Paul II. Some observers suggested that this was to signal to certain powerful, occult elements that these two were carrying on the revolutionary, anti-Catholic, anti-Christ program of John XXIII and Paul VI -- and their work, the 2nd Vatican Council. As the sixties progressed, everywhere in Catholic structures pictures of Pope Pius XII and all Popes before him where nowhere to be seen, while pictures of John XXIII, Paul VI, and John Paul II were ubiquitous. The names John and Paul also had special significance in Masonic ritual. -- end of note from the publishers of this website]

What has also now begun to emerge is that at the 1958 conclave, a cardinal had indeed been earlier validly and constitutionally elected pope on the fourth ballot on Sunday 26th October, hence the white smoke. It is now a matter of scholarly research as to the identity of that cardinal, and whether he did pronounce the “accepto”, taking the name Gregory XVII, and whether he was subsequently threatened, and illegally and unconstitutionally shoved aside by a clique of cardinals acting on the instructions from ‘outside’.

. . . First change the Head – then change the Constitution. This is the classic ploy of World Revolution.

[Note from the website’s publishers: The concept of "World Revolution" may seem strange or fantastic to some, but there is little excuse for those who claim to be interested in current events or the future of their country or the world to be ignorant of this exhaustively documented phenomenon. The "revolution" is a revolt against the Divine Plan for Order, although many of the revolutionaries themselves may not view it that way. For an excellent and relatively short explanation of this phenomenon, read two short introductions from Fr. Denis Fahey here.

Another book written about the nuts and bolts of the Ruling Elite of World Revolution would be the late Ivor Benson's This Age of Conflict. The Ruling Elite of the secret societies, of Judeo-Masonry, grasped control of the Federal Reserve Board in the USA in 1913, and through the terrible misuse of the power to issue money in secret for a great country, grasped control of Russia in 1917, helped fund Hitler to power in 1929, put Franklin Roosevelt into the American Presidency in 1933, financed the making of the atom bomb from 1939 to 1945, financed Mao Tse Tung and the Communists to power in China in 1946, backed the takeover of Palestine by the Zionist-Jewish state in 1948, managed the cold war from 1945 to 1989, grasped control of the Vatican structures in 1958, consolidated control of the American big media during the 1950s, grasped control of USA elections via easily rigged computerized systems by 1988, and are now fomenting the contrived "war on terror" complete with orchestrated false-flag terror attacks to trick the USA into going to war, and with World War III-threatening attacks on Arab countries for the benefit of the state using the name "Israel" and international Jewish-Masonic finance.

A very small sampling of books (all good for voluminous documentation, but not all sound in their premises) on the subject of World Revolution can be found here. There are many other sites on the web which produce similar booklists, such as here. And many of the excellent books of Douglas Reed, London Times correspondent and eye-witness to history during the critical period of 1915 to 1950, can be found here. The financial motive behind world revolution can be found in many of the books above. The more important spiritual motive underlying it all can be found in Fr. Fahey's The Kingship of Christ and the Conversion of the Jewish Nation, at the website www.come-and-hear.com , in Michael Hoffman's Judaism's Strange gods, and in Elizabeth Dilling's The Plot Against Christianity.

To return to the death of Pius XII, the observation has been made that on the day that the last universally acknowledged genuine Catholic Pope passed into history, and upon the election and immediate repudiation of the mystery Cardinal, his lawful successor, on the 26th October, the Catholic Church, the Spotless Bride of Christ, went underground. She had returned, metaphorically as well as in some respects, in reality, to the Catacombs. (That the writer of this tract has to disguise his identity under a nom de plume, is further evidence of that fact. He must do so in order to protect his family, friends, and fellow Catholics from the malign grasp of the enemies of Christ now occupying the highest places in the offices and institutions of His Holy Church, as well as in Academe, Civil Government and the Media.)

During those four apocalyptic days in October, an antipope was “elected”, who would then go on to call an illegal Council, found an anti-church, and be succeeded by three anti-popes (website publisher’s note: this was written in 2002, before the death of John Paul II [Wojtila], and therefore before the elevation of Benedict XVI [Ratzinger] to occupation of the Papal Chair; the three anti-popes the writer is referring to are: John XXIII [Roncalli], 1958-1963; Paul VI [Montini], 1963-1978; John Paul II [Wojtila], 1978-2005; the writer leaves out John Paul I [Luciani] here, because his short occupation of the Papal Chair, about 30 days, did not provide him time to become a major factor in any direction; Luciani appears to have been a dupe, a place holder for Wojtila, which may explain his sudden and totally unexpected exit from the scene after only a few weeks) all of whom would in the spirit of the French Revolution, drive genuine Catholicism further underground, actually obliterating it in many parts of the world, and replacing it with a Judaeo-Masonic, humanistic parody of the One True Church of Jesus Christ.

That antipope was Angelo Roncalli, the illegal Council he called was the so-called Second Vatican Council, and the anti-church he founded is the Conciliar Church of Vatican II. His anti-papal successors were anti-popes Paul VI (Giovanni Baptista Montini), John Paul I (Albino Luciani) and currently (website publisher’s note: remember, this was written in 2002) John Paul II (Karol Wojtila)

Some years ago the author encountered a wise Catholic lady in a rural town in a certain country, who, mourning the terrible despoliation of the Catholic Faith and its traditions said, “We certainly didn’t get World War III, -- but we got Vatican II instead.” Indeed!!

(end of quote from Ab Initio by A.D.O. Datus)

For more information go to:

Scripture Scholars, Ancient and Modern and