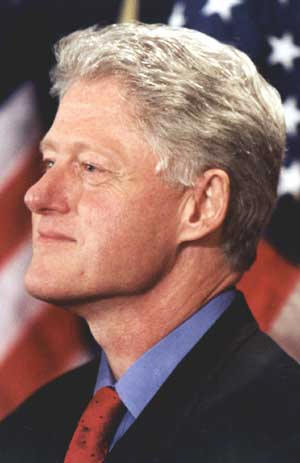 In a recent issue of "Prophecy in the News" magazine, author J. R.  Church informs us of a most striking genealogy. He writes:

In an Associated Press article published in The Daily Oklahoman, October 28, 1996, Harold Brooks-Baker, director of Burke's Peerage, a London-based publishing house that traces the lineage of royal and noble families, said that Bill Clinton and Bob Dole have more in
common than wanting to be president. They are distant cousins! However, Clinton has bluer blood, giving him an election edge.

Bill Clinton was born William Jefferson Blythe, but took his stepfather's name as a teenager. Clinton's ancestry can be traced
back, on his mother's side, to King Henry III who ruled England from 1227 to 1272. He is descended from King Robert I of France.

Over the past six years, efforts to uncover Clinton's personal history have been nigh unto impossible to confirm. The President had
all records of his family history, school records, medical history, etc. sealed.

In 1992, we called Burke's Peerage and asked if they had done any research into Clinton's lineage. We were told that they had not done
a genealogical search on his ancestry. It seemed strange to us at the time that they denied knowing anything about Clinton. Shortly
afterward, we came across an AP story that linked Clinton to a Gypsy king--citing Burke's Peerage as a source. We again called Burke's
Peerage and repeated our request. Again, they told us that no work had been done. That's when we read the article to the person on the
phone, naming Harold Brooks-Baker as a source. She then admitted that they had done some work on the genealogy. She said that we should talk with Harold Brooks-Baker, himself. She requested that we fax a letter and request a reply.

We did as she asked. Two days later, having received no reply, we called again. This time, we were able to get Mr. Harold Brooks-Baker on the phone. He asked why we wanted the information, and said he would have to clear our request with Washington. He said, 'It's a very touchy subject.' He talked like there might be something to hide.

Indeed! What might that closely-guarded secret be? J. R. Church continues his riveting story:

Bill Clinton's family goes back to William Henry Harrison and Benjamin Harrison, making him related to Gerald Ford and Jimmy
Carter. His kinship to Ford makes him 'near kin' to Richard Nixon and George Bush. Small world, isn't it?

There is no official documentation for what I am about to relate. I talked with a man in the summer of 1996 who claimed to be a
descendant of the Rothschild banking family. He informed me that Bill Clinton used to attend their family functions as a boy.

This man grew up in the same town with Clinton. They attended the same schools. He would see Bill at family get-togethers wearing a
Jewish skullcap. According to him, Bill Clinton is a descendant of the Rothschild family.

He said the rabbis would kiss his hand and refer to him as the Segulah Yeled Eklatosh--the 'royal-boy-chosen.' He said that
according to private family records, the original Meyer Amschel (Bauer) Rothschild (pictured, right) claimed to have had a heavenly visitor in 1773,
who informed him that Jesus was not the Messiah. He told Meyer Amschel that the family from which he descended would produce the
Messiah in the last half of the twentieth century.

A few weeks later I read in 'The Jewish Festivals' by Hayyim Schauss (published in 1938) that the Roman Emperor Nero had faked his death, escaped and married a Jewish woman. The famous thirteenth century
Rabbi Meir (also spelled Meyer) of Rothenberg, Germany, claimed direct descent from Nero. I called my Rothschild family friend and
asked it there was a family connection. Two days later he called me back, and said 'Yes! The Rothschilds are descended from Nero!'..."
("Roots of the Presidents," by J. R. Church, Prophecy in the News, July 1998, pages 18-19).

[This article goes on to describe Nero's character and ends by saying Nero's Aramaic name (Nron Ksr) equals 666. They also show
William Jefferson Clinton and Hillary Rodham Clinton as both adding up to 666 but the numbers are off as published.]