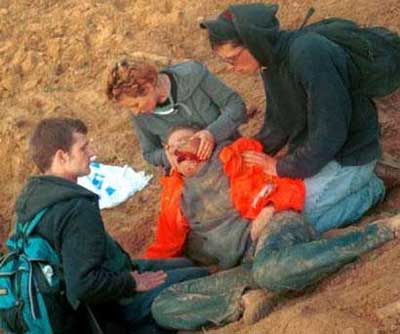 The BBC has released a remarkable film about the killing of three international peace activists by the Israeli army in the occupied Gaza Strip. Documentary evidence provided in the film strongly suggests that the American Rachel Corrie - and two British activists - were murdered.

Last spring, within a period of seven weeks, one British and one American peace activist were killed by the Israeli army in Rafah, a Palestinian town at the southern end of the occupied Gaza Strip. A second Briton was shot in the head leaving him brain-dead. In two of the cases the Israeli army is being blamed for murder; the third is considered "attempted murder." 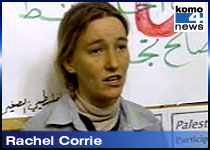 military bulldozer crushed the 23-year-old American peace activist Rachel Corrie, who was the first to die on March 16, as she tried to prevent it from demolishing a Palestinian doctor's home.

British photographer Tom Hurndall, 22, was left brain dead after being shot in the head by an Israeli soldier on April 11. British cameraman James Miller, 34, was shot by an Israeli sniper as he left a house with two other journalists on May 2.

When Killing is Easy was shown 4 times to a worldwide audience on the commercial BBC World television network on November 22 and 23. Some cable television viewers in the United States would have been able to view the program.

The three international observers died, or nearly died, at the hands of the Israeli military between the middle of March and the first week of May. Hurndall was shot in the head as he took a Palestinian toddler, who had frozen under Israeli fire, into his arms. Today, Hurndall is brain-dead and is kept alive on life-support equipment.

Tom's father, Anthony, is a lawyer in the City of London. After six weeks of investigation, Hurndall has come to the conclusion that the shooting of his son by Israeli forces is "a case of attempted murder. If Tom dies, and that is a likelihood, then it will be murder," he said.

Jocelyn Hurndall wrote to The Guardian after an Israeli government check for about $12,000, sent to the Hurndall family to pay for "a fraction of the expenses incurred," bounced. When the check finally arrived after five months of negotiations with the Hurndall family, the Israeli government check was not "honored" by the Bank of Israel, Hurndall wrote. "Insufficient funds' was the reason given.

According to evidence provided in Sweeney's film, the IDF report on the shooting of Hurndall is completely wrong about where he was, what he was wearing, and what he was doing when an Israeli soldier shot him in the head.

"It is a mind-numbing task to understand the morality and to use the logic of the Israeli government," Hurndall wrote. "What hope do Palestinians have when such profound disregard and disrespect is shown to humanity, collectively and individually?"


SILENCED WITNESSES
The BBC film was produced by John Sweeney, whose article on the killings, "Silenced Witnesses," was published in The Independent (UK) on Oct. 30.

"Making our film, When Killing is Easy, has been the most harrowing ordeal of my professional life," Sweeney wrote. "But it is vital that it is evidential - and that is really tough when the Israeli government and the Israeli Defense Force (IDF) have refused to speak to us."
Rachel Corrie, the first of the three to die, was using her body to defend the home of Dr. Samir Nasser Allah from an American-made bulldozer used by the Israeli army to demolish the homes of Palestinians. Corrie was a member of the International Solidarity Movement (ISM). ISM members stand between the Israeli bulldozers and the homes that the IDF wants to flatten.

Israeli bulldozers have razed thousands of Palestinian homes in the occupied Gaza Strip and the West Bank. The bulldozers are primarily made by the Illinois-based Caterpillar company.

Tom Dale, an ISM eyewitness, had a clear view of the incident: "He [the driver] knew absolutely she was there. The bulldozer waited for a few seconds over her body and it then reversed, leaving its scoop down so that if she had been under the bulldozer, it would have crushed her a second time. Only later when it was much more clear of her body did it raise its scoop."

"MY BACK IS BROKEN"
"My back is broken," Rachel told Alice Coy, a fellow ISM activist who was with her.

An Israeli pathologist, Dr. Yehudah Hiss, noted that Rachel appeared to have been run over by the bulldozer, Sweeney wrote. Hiss found the cause of death to be "pressure to the chest." Her shoulder blades had been crushed; her spine was broken in five places and six ribs broken. Her face was apparently slashed by the bulldozer blade.

The IDF produced a report that says, "Corrie was not run over by an engineering vehicle." It added, "for good measure" Sweeney says, that Corrie was "hidden from view of the vehicle's operator."

The footage seen in the BBC film proves these statements to be false. The family of Rachel Corrie believes the IDF report to "be a blatant fabrication," Sweeney wrote.

The British cameraman James Miller was shot dead by an Israeli sniper as he left a house in Rafah with two other journalists on the night of May 2. An Associated Press TV News (APTN) cameraman filmed the entire scene.

One of the three journalists held a white flag; Miller was shining a light on the flag and a third journalist held up her British passport. There was no shooting and the area was quiet as the audio track of the film clearly proves.

The three had walked about 60 feet toward an Israeli armed personnel carrier to request safe passage to leave the area when the first shot was fired. "We are British journalists," Saira Shah cried out into the darkness.

"Then comes the second shot, which killed James," Sweeney wrote. "He was shot in the front of his neck. The bullet was Israeli issue, fired, according to a forensic expert, from less than 200 meters [600 feet] away."

The IDF maintains that Miller was shot during crossfire, although no shooting is heard on the APTN tape apart from the two shots fired from the Israeli military vehicle.

When the APTN tape was shown to an Israeli soldier, who is shown in the film, he said the television team did not look like Islamic terrorists and concluded: "That's murder."

Christopher Bollyn is a regular contributor to American Free Press  .
_____

"Should international communism ever complete its plan of bringing civilization to naught, it is conceivable that SOME FORM OF WORLD GOVERNMENT in the hands of a few men could emerge, which would not be communism. It would be the domination of barbarous tyrants over the world of slaves, and communism would have been used as the means to an end."
(The Patriot (London) November 9, 1939; The Rulers of Russia, Father Denis Fahey, pp. 23-24)

BBC-TV (The documentary When Killing is Easy is not presently listed on the BBC's website—has Israel pressured the network to drop it? We are looking into this matter and ask anyone with information to please contact us at our e-mail address: realnews247@fuse.net)
http://www.bbc.co.uk/tv/

Concerning Brian Avery (a fourth victim of  the Israeli army):
The Brian Avery shooting: When will we realize that there can't be this many "accidents"?

Other concerned groups:
http://www.inminds.co.uk/boycott-israel.html
Jews for Justice for Palestinians
http://www.palestinemonitor.org/index.html