Introduction to
9/11 Cover-up Section
(meant to be read) 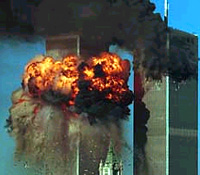 After reading this short introduction page, see all the evidence at our 9-11 cover-up page.

On our "9-11 Cover-up" page we bring you the most important links regarding the EVIDENCE surrounding the 9-11 terror attacks. (It is updated as new information emerges and new web pages of interest come to our attention.)

A growing number of impressive and responsible voices are asserting that the evidence indicates that the 9-11 terror attacks were accomplished by crashing the planes into the Twin Towers using remote control technology, after which the crime scene was reduced to rubble by a controlled demolishing the buildings.

The Ruling Elite cover story was put out IN UNISON (of course) by the Big 5 TV  Networks within 24 hours after the terror attacks, and it hasn't changed since, -- even while easily done investigations have been blocked, evidence has been withheld from families of 9-11 victims, the crime scenes have been largely destroyed, and the Congressional investigation has been delayed, under-funded. and frustrated by the W. Bush administration.

Carol Valentine effectively broke the story of the existence of remote controlled planes in October, 2001 with "911: No Suicide Pilots.". Now unmanned "drones" are a household word. Professor AK Dewdney (professor at the University of Western Ontario) issued "Ghost Riders in the Sky" in 2002, complete with original, groundbreaking research on the feasibility of cell phone calls made from planes at high altitudes. Colonel Donn de Grand Pre (ret), in his book, "The Viper's Venom" concludes that the 911 terror attacks were done by remote control technology. Grand Pre was the top US arms dealer to the Middle East under the Ford and Carter administrations. What he saw caused him to leave government service and begin investigating the forces he saw warping our nation's destiny. Author Hutton Gibson, the father of world famous actor and director Mel Gibson, asserted in the New York Times magazine of March 9, 2003 that Osama Bin Laden had nothing to do with 9-11, but that the planes were rammed into the buildings by remote control. By May, 2003, an article by Randy Lavello entitled, "Bombs in the Building: World Trade Center 'Conspiracy Theory' is a Conspiracy Fact", quoted Captain Kent Hill (Air Force - retired) as backing the remote control explanation of the 9-11 terror attacks.

In addition, a number of other knowledgeable people have spoken out about the suspicious manner in which the WTC buildings came down after the attack, resembling no known structural collapse of a building, but rather the deliberate imploding of one as is frequently done by construction companies in urban renewal projects.  Immediately after the attacks, Dr. Van Romero, a physics professor at New Mexico Tech questioned whether it was possible for the WTC to come down as claimed. Not long afterwards and without explanation, he publicly changed opinion to one in conformity with the official version, but now the claim is being made that he was forced to do so by government operatives. More recently, Morgan Reynolds, a former official in the Bush Administration and ex-British intelligence agent David Shayler have added their voices to those who don't believe we're being told the truth in this matter.

All these links and many more concerning the terrorist acts can be found on at our 9-11 cover-up page.

DISCLAIMER: Needless to say, we at Real News 24/7 do not necessary agree with every thought or the implication of every article we link to, nor with every stand or position taken by the person or organization responsible for an article we recommend. Nor do those who wrote such articles necessarily agree with everything we say.  Real News 24/7 assumes no responsibility for the opinions expressed in any work taken from external links.  In each section we have listed the best articles we could find at this time on a given subject with regard to documentation and analysis of the subject under discussion, regardless of minor or major flaws in the article. We soon hope to have an analysis of the strengths and weaknesses of each article recommended, which will appear right under the link to the article itself. The information in our "Latest News and Analysis" feature is meant to bring to your attention information or views generally not easily found on the Big TV networks and other controlled media sources.