(See Joe Vialls comments on this report, linked at the articles end. Ed.) 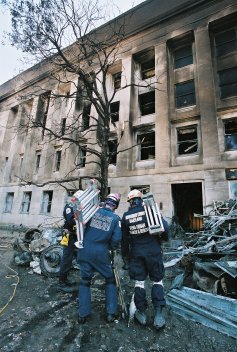 Due to the secrecy surrounding the 9-11 attack on the Pentagon and the lack of evidence that a large passenger jet smashed into the reinforced concrete and stone wall of the massive building, a host of conspiracy theories have cropped up. A photograph from the crash site could easily settle the debate, but no one seems to care.

A series of photographs taken by an official federal photographer at the Pentagon crash site show what appears to be an easily identifiable piece of a small-diameter turbofan engine. If the government wants to prove that a Boeing 757-200 crashed into the Pentagon, why is no one willing or able to identify which part from which engine this is?

The photographs show a part of a turbofan jet engine and were taken by Jocelyn Augustino, a photographer for the Federal Emergency Management Agency (FEMA), at the Pentagon crash site on September 13, 2001. The round piece appears to be less than 3 feet in diameter and is propped up against what appears to be part of the engine housing and thick pieces of insulating material.

A Boeing 757 has two large engines, which are about 9 feet in diameter and 12 feet in length. A Pratt & Whitney PW2043 engine, used on some 757 aircraft, has a fan tip diameter of 78.5 inches. Nothing this large is to be seen in the FEMA photographs.

The photo ID numbers are 4414 and 4415 and can be seen on-line at (high resolution downloads available):
www.photolibrary.fema.gov/photolibrary/advancedsearch.do   (Scroll to bottom of page and enter number in "Photograph ID" box.)

Eric Hufschmid, author of Painful Questions: An Analysis of the September 11th Attack, included one of the photos in the recently published German edition of his book. American Free Press and Hufschmid are actively trying to obtain a positive identification of the parts seen in the FEMA photographs and have contacted numerous agencies and individuals.

The evidence available to the public simply does not support the official version that a Boeing 757-200, with two large engines and massive landing gear, flew close to ground-level and smashed into the wall of the Pentagon. For example, passenger jet landing gear are heavy and durable, however, none were seen being removed from the Pentagon.

On the other hand, military personnel were photographed removing from the crash site a large light-weight object shrouded by a blue tarp. What was under the tarp and why was is being kept secret?

Five photographs taken from a video camera on the grounds of the Pentagon show a small white object approaching the Pentagon and a massive high-energy explosion, however, there is no plane visible. Conspiracy theorists ask: If a 155 foot-long, 60 ton Boeing 757 caused the explosion at the Pentagon, why does it not appear in the photographs. And where is the debris that would have resulted from its impact with the limestone clad concrete wall?

One of the eyewitnesses at the Pentagon told the Washington Post that the plane he saw was small: “Steve Patterson, who lives in Pentagon City, said it appeared to him that a commuter jet swooped over Arlington National Cemetery and headed for the Pentagon…

“He said the plane, which sounded like the high-pitched squeal of a fighter jet…

“The plane, which appeared to hold about eight to 12 people…”

For those who say a smaller plane or unmanned drone, such as a Global Hawk, was involved in the Pentagon attack, identifying the piece in the photo could prove what kind of aircraft hit the building.

The Global Hawk is a single-engine drone that uses a Rolls Royce Allison engine hand-built in Indianapolis, Indiana. The AE3007H engine has a diameter of 43.5 inches. The unmanned Global Hawk, using a satellite guidance system, is capable of landing within 12 inches of its programmed destination.

Because the Global Hawk is a surveillance drone, the engine is contained in a heavily insulated housing to be extremely quiet. This corresponds with eyewitness reports. American Free Press asked eyewitness Steve Riskus, who said he was within 100 feet of the aircraft, what he heard. He said he “did not recall hearing anything.” If a 757 or jet fighter flew at high speed 100 feet from an eyewitness the sound would be deafening.

American Free Press contacted the U.S. Air Force, American Airlines, Rolls Royce in Indianapolis, and others to ask for help identifying the part, but no one is willing to discuss the photographs. In several cases the spokesmen were ready to provide a statement before even seeing the photos.

John W. Brown from Rolls Royce said, “It is not a part from any Rolls Royce engine that I’m familiar with, and certainly not the AE3007H made here in Indy.”

Capt. Roger Burdette (USAF) from Arnold AFB, Tenn., said: “After considering your request, I’ve decided that it’s not in our best interest here at Arnold to speculate about this unidentified part. My main concern is that if, as you suggested, two Global Hawks were missing, the Air Force would officially investigate the disappearances.”

Col. Alvina Mitchell, Air Force spokesman at the Pentagon, said, “There are many issues with photos,” suggesting they may not be authentic. For “legal reasons” she could not respond to any questions.

American Free Press then turned to the Federation of American Scientists (FAS) in Washington. FAS is known to have access to many scientists and data concerning U.S. military hardware. Josh Kellar at FAS, however, told AFP that the organization did not have any personnel who could identify the basic parts of a jet engine like the ones in the photo.

In a written response, he rejected the theory that anything other than a high-jacked passenger jet hit the Pentagon: “I think the secrecy surrounding the 9/11 investigation and the enormous gravity of the attack itself have spawned a number of conspiracy theories, but there is a massive body of evidence that leaves no doubt as to what the actual cause of the devastation at the World Trade Center and Pentagon was: they were hit by hijacked passenger jets.”

But Josh and the good scientists at the FAS can not say what part of a 757 engine is seen here.

Joe Vialls comments can be found linked below:
www.rumormillnews.com/cgi-bin/forum.cgi?read=36803